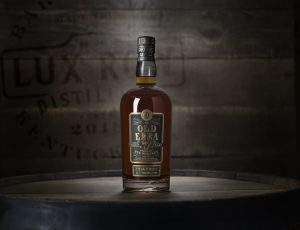 The holidays are a time for celebration, and what can make any celebration better? New whiskeys! This year, we’ve welcomed a new addition to the Lux Row Distillers family of whiskeys: Old Ezra 7-Year Straight Rye Whiskey. A limited-time offering, you’ll be able to pick up this gorgeous sweet and oaky whiskey starting in late November.

Here’s what you can expect:

Just in Time for the Holidays, Old Ezra 7-Year Straight Rye Whiskey is a Welcome New Addition to Your Bar Cart

Old Ezra 7-Year Straight Rye Whiskey gets its name from the seven-year aging process. The highest-quality ingredients are blended, charcoal filtered, and aged the old-fashioned way, for a rye whiskey that’s remarkably smooth, mellow, and oh-so-easy to drink. Bottled at full proof, the complex flavors are brought to you by two rye mashbills, 51% rye whiskey and 95% rye whiskey. The overall result is a 57% ABV, 114-proof whiskey that’s just sweet enough, with hints of vanilla and honey, an oaky undertone, and a finish full of warming spices and tobacco.

How to Find It

You’ll find Old Ezra 7-Year Straight Rye Whiskey bottled in a beautiful, high-end, custom-designed bottle, emblazoned with the Old Ezra branding that you likely can already recognize on sight, in a classic evergreen hue complimented by gold and copper foil accents. The whiskey will be available on-site at the Ezra Brooks tasting room and on store shelves near the classic Old Ezra 7-Year Kentucky Straight Bourbon Whiskey.

Find it now with our Whiskey Locator.

How to Use It

Straight, neat, on the rocks, or in a cocktail, there is no wrong way to enjoy your whiskey. You can check out any of these cocktail recipes on our site. You can also use Old Ezra 7-Year Straight Rye Whiskey in this New York sour.

Shake the whiskey, simple syrup, and lemon juice together with ice until well-chilled, and then pour into a rocks glass over new ice. Then, pour the Malbec over the back of a spoon onto the top of the cocktail. It may take a little practice, but if you get it right, the wine will float atop the other ingredients, creating a beautiful, layered look that will impress your guests this holiday season (or any time after!).

Double Up — Two Whiskeys are Better Than One

But why settle for one bottle of whiskey when you can have two? Stock up your bar cart with not just the NEW Old Ezra 7-Year Straight Rye Whiskey, but also the original Old Ezra 7-Year Kentucky Straight Bourbon Whiskey–which took home the award for “Best Overall Bourbon” at this year’s San Francisco Spirits Competition.

It’s Time You Try Old Ezra 7 Rye for Yourself

Look out for Old Ezra 7-Year Straight Rye Whiskey at your preferred spirits store in the coming weeks. Cheers!